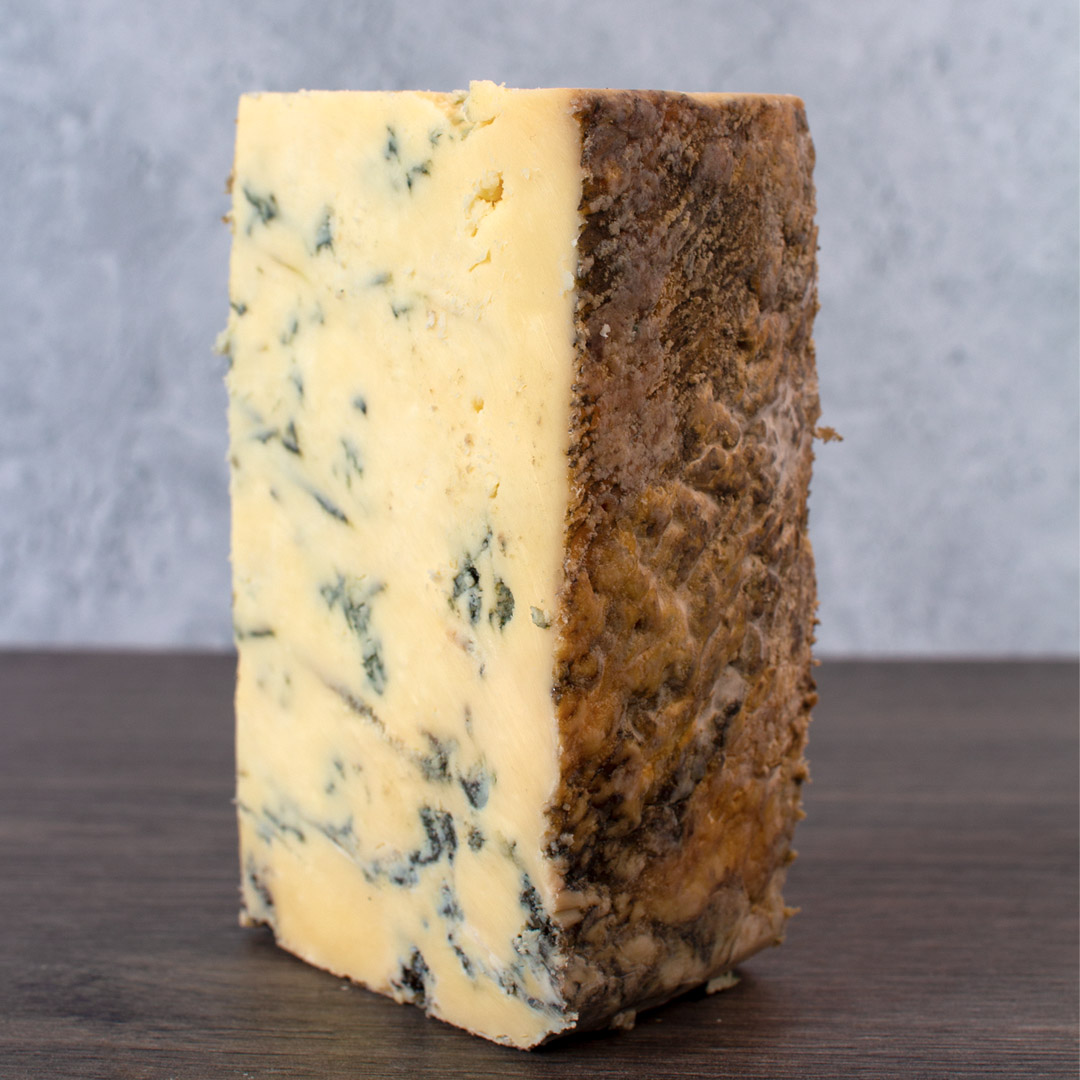 Recipes in this blog


If you are a home cook and love blue cheese, without a doubt you have dabbled with a broccoli and stilton soup recipe (or two or three) and perfected your black and blue burger. But is Stilton always the best choice? Far be it from me to challenge “The King of English Cheese” but we do have an abundance of choice for great blue cheese in the UK, with each adding a different profile to a recipe.

Enter Dorset Blue Vinny. In the counter you would not be faulted for confusing it with a stilton, they bare many similarities, but your cheese monger would have no issue plucking it from an array of blue-veined truckles without a glance at the label. It’s distinctive in its own way, the crust a little moister with brown dusting rather than white and tan, a distinctive yellow shadow along the edge of the cheese, and notably less creamy. Its crumbly texture is why it differs from stilton, along with its unique earthy and robust flavour. We go into detail about the history and production of the cheese in our Blue Vinny Feature here, but note that Blue Vinny is made from hand skimmed pasteurized milk, taking away fat content and giving the cheese a crumblier texture. It’s because of this that Blue Vinny makes such a great cheese to cook with, allowing the lovely notes in the cheese to come through in the dish without adding too much creaminess.

For any recipe calling for creamy/crumbly blue cheese, you can easily inset Blue Vinny. As a rule of thumb, blue cheese recipes often like a sweet component and Blue Vinny shines with nutty, forestry umami flavours, and always wants to be the star of the dish. If you only have a tiny chunk left, throw it in the freezer and pull it as a substitute to parmesan to grate over pasta, make croutons with, or add a Vinny kick to any soup – freezing crumbly and semi creamy cheese enables you to grate them like a very hard cheese. This is one of the only few times it is acceptable to freeze an artisan cheese. So get experimenting! From simply crumbling Dorset Blue Vinny into your favourite cream-based pasta dish, sliding shards into fillet minion before wrapping in bacon and grilling, to choux pastry filled with Blue Vinny cream and walnut puree by the fire on New Year’s eve – the possibilities are as wild and endless as your imagination. Here are a few simple recipes to get you started – so you can work your way up to choux by New Year’s.

As the days draw in and a chill enters the air, we all abandon our BBQs and salads for warming comfort foods. Autumn and winter are the seasons of soups, stews and tray bakes. There is no more coveted soup in the month of October than butternut squash soup. Easy to make and unmistakable, this soup embodies everything Autumn (especially when adding classic pumpkin spices, though not with blue cheese!) Armed with a healthy wedge of Dorset Blue Vinny I decided to set to the task of developing a twist on the much loved (and yes, much blogged about) soup. The goal was to keep things simple. I want the squash and Blue Vinny to be the prominent flavours and not water them down and complicate things with too many spices and flare. I have always found Blue Vinny to be earthier than a Stilton, but either balance nicely with the sweetness from the squash, but I wanted to add another element to complement those earthy notes. I love chestnuts and have always been confused why, like their often-paring partner brussels sprouts, they seem to have been confined only to the realm of Christmas. They’re brilliantly versatile (great in sweet or savoury) and convenient as you can use them straight from vac-pac, or if you can find them fresh, and have the time, can be roasted off quickly. Chestnuts go great with blue cheese as they add another element of sweet and their slightly bitter notes complement the cheese well.

Great soups are about keeping things simple and getting the most out of your flavours. I roasted off the squash to bring out its sweetness (why would you ever not do this?) Then, sautéed some onion and garlic (the beginnings to many great soups) and added a bay leaf and a few fresh sage leaves.  It’s important to use quality stock and if you have not tried 9 Meals From Anarchy’s line of stocks then add it to your next shopping list. It has half the salt of other stocks and over 75% vegetables, giving it a deep concentrated flavour. 9 Meals From Anarchy’s stock is perfect for any soup but essential when using higher salt ingredients like Dorset Blue Vinney or any blue cheese so the final product is not overly salty.

When the squash and chestnuts are ready, simply scoop out the meat of the caramelised squash, roughly chop the chestnuts and squash, then add to your softened onions and garlic. Give it a good mix and let it simmer together for a minute, add your stock and simmer for another ten minutes or so. Meanwhile, crumble up your Dorset Blue Vinny and after fishing out the bay leaf add it to your soup. Let the cheese melt then give it a blend with your hand blender. You’re done! A simple yet satisfying butternut squash soup layered with flavour, really letting the Dorset Blue Vinny shine. I like to serve with a few crispy lardons on top, some leftover chestnuts and some toasted bread on the side for dipping – but a cream swirl or a garnish of blue cheese croutons would also complete the dish.

As I have written before, omelettes are the perfect dish for a quick weekday meal that helps use up your leftovers in the fridge. They are a staple in my household on a busy Monday (is there a more hectic day of the week?)

I first made this omelette when we had some brussels sprouts and chestnuts left over from a roast on Sunday. (Brussel sprouts are not just for Christmas!!!) My wife may have cringed at the time, as flashbacks to Monday leftover roast curries from her childhood danced behind her retinas, but luckily I have a long leash and a lot of trust when it comes to flavour combinations from stealer past performances. Blue Vinny had featured on our Friday Night Cheeseboard last week, and we always have a pack of smoky lardons in the fridge or freezer, so we had all the makings of a filling Monday night omelette.

I’ve been a fan of wilted spinach salads, with warm dressings, since trying one as a teenager on the side of a stromboli (calzone) from a popular dine-in pizza chain back in Canada. Since then they have been a staple in my life and I’m always playing around with toppings and dressing styles. The base to the dressing normally consists of bacon fat, so if my omelette is going to feature bacon then likely a wilted spinach salad will accompany it.

Again, it’s been a long day and you want to keep things simple so leftovers are great, but if you just really fancy making this omelette you can do from scratch pretty quickly. Just roast off your cleaned and prepared sprouts and vacpac chestnuts in the oven while you prepare the lardons.

Add a bit of olive oil to the pan to fry the lardons, this helps ensure you have enough fat left over for the dressing. When cooked, set aside to dry on some paper towel and keep the fat.  Add some local honey and quality balsamic to the fat so it’s ready when you need it.  Dry fry your chestnuts for a few minutes and add your bacon. Add your sprouts to warm through and then set aside. Prime your pan with egg mixture then layer the lardons, sprouts and crumbled Dorset Blue Vinny. Low and slow is the key here to let the egg cook and the filling warm and then melt. Flip it, finish it, and repeat for how many omelettes you need.

For the salad, in a dry pan, warm through some red onion and cherry tomatoes and set aside. Add spinach to the pan and move around until just warm and wilted. Plate the spinach and top with onion and tomatoes. Give your dressing a quick mix and heat for ten seconds in the microwave then dress your salad and plate your omelette. Dinner’s served!

Read our omelette blog here for a gushing campaign on the glory of the modest omelette.

If Dorset Blue Vinny often graces your cheeseboard or is a staple in your cheese box in the fridge, then these are just a few recipes to get your imagination going and look out for more recipes on here featuring Blue Vinny in the near future. Meanwhile, try these out! We love to hear how you get on so tag us in your socials when cooking and also let us know about your own Dorset Blue Vinny creations.

If you have never tried Blue Vinny (really, what???)  then stop what you are doing right now and click here to rectify the situation…you won’t be disappointed.